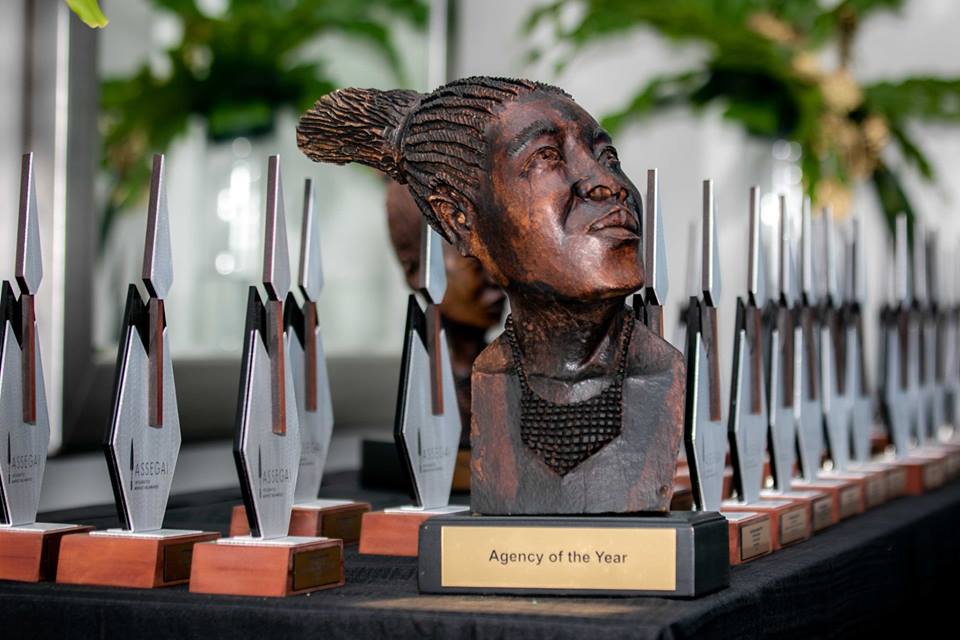 History of the Awards

The journey of the Assegai began in 1998, not long after the dawn of democracy.

The Direct Marketing Association of South Africa recognised a need in the market for a high-profile event that would serve not only as an acknowledgement of excellent work done, but also as a networking forum for players in the Direct Marketing field.

Michelle Perrow, DMASA Board member, was tasked with the bringing the envisioned event to life.

The first order of business was naming the award, and, following industry submissions and a vote, the overwhelming majority of members selected the “Assegai” as the symbol of Direct Marketing excellence. This symbol speaks of the ability to aim at and find your target – of “spearing a specific niche”. The DMASA Assegai Committee then exhaustively studied best-of-breed international programmes and structured the Assegai Awards to suit all direct media and meet all criteria.

In its early years, the Assegais proved highly successful, attracting hundreds of entries and full attendance at the gala evenings. Through experience and by adopting a “learning” approach, the architecture and judging criteria were refined. However, in 2004, under the MFSA, the Assegais were integrated into the Loerie Awards.

This ultimately proved unsuccessful, with one award focusing mainly on the creative component and the Assegais on ROI. 2005: The year the DMASA was re-established saw no awards and, in 2006, the DMASA created a “direct” section within the newly established Marketing Excellence Awards.

The market wanted their Assegais back, though, and these were successfully re-launched in 2007, independent of other awards. Since then, the Assegais have moved from strength to strength, adding and revising categories in line with market trends anddevelopments, as well as significantly increasing the number ofentries year-on-year, bearing testimony to the growing impact of Direct Marketing in South Africa.

The ANA International ECHO Awards launched in 1929 and relentlessly focused on seeking out and recognizing marketers from around the world who have dared to imagine a future rich with the opportunity of data, and who have explored its potential to advance their brands toward new frontiers. Each category is dedicated to an area of expertise critical to improving performance in today’s data-driven marketing ecosystem.
Sharp along their creative edge and powerful enough to deliver a clean, crisp, authentic brand experience that drives tangible results, ANA International ECHO Award winners have represented the world’s greatest data-driven storytellers, their amazing work, and the stunning performance they have achieved.
Will you join them this year?

COMMITMENT FROM THE LARGEST ASSOCIATION OF MARKETERS ON THE PLANET.

You do NOT need to be member of the ANA to enter or take part in the International ECHO Awards.
ANA members represent more than 20,000 influential brands and the largest community of marketers in the world. As the industry leader, we help our members become more effective marketers, build stronger brands, and drive industry and societal change. Our CMO-endorsed Growth Agenda supplies a 360-degree focus on all elements of the business enterprise. We also empower marketing teams to become high performers through our unmatched proprietary intellectual capital, including insights, events, and professional development programs.
The ANA Data and Analytics Practice Making today’s investments in digital and data technology more effective by upgrading core talent and capabilities and enabling new digital services that drive growth through an optimized brand/consumer information exchange built on trust and the responsible use of data and technology.
The ANA International ECHO Awards’ rich history of recognizing data-inspired greatness provides benchmarks for our industry and inspiration to explore new opportunities.

The Direct Marketing Association of South Africa (DMASA) has made tremendous progress in mobilising the industry after the dissolution of the MFSA. And so, it was evident that direct marketers required a body to both regulate and protect the industry. The DMA again established itself as an independent body in November 2005 representing not only direct marketers, but with a focus on the consumer too.

Since this time, the DMA has worked hard in terms of addressing the challenges that lie ahead for the direct industry in the face of legislative issues, as well as raising the bar on professionalism. Key to the DMA’s activities going forward will be the promotion and expansion of Direct Marketing within the country and into Africa.

The DMASA aims to protect both the industry and consumers from unethical and/or ignorant practitioners and lobbies against adverse legislation from government and other regulatory bodies.

The Association in South Africa is an affiliate of the international Direct Marketing Association, which has representation in 46 countries. While remaining a separate entity, the DMASA is globally aligned and has strong ties throughout the network, giving it access to global insights on the DMA’s key functions and areas of contribution. Over and above its role as protector, the DMA also set out to promote best practice and raise the standard of Direct Marketing through the origination and regular updating of DM Codes of Practice, best practice guidelines as well as training and skills development.

The DMASA’s annual Assegai Awards are designed to benchmark and continuously raise the bar in respect of the creative effectiveness, strategic importance and profitability of direct campaigns, projects and business. Other initiatives include tariff negotiations with primary industry suppliers on behalf of members, lobbying on data privacy issues, database protection, and anti-spamming issues. DMASA is also committed to providing members with formalised education, networking forums offering the latest information, and providing informed legal opinions. For more information go to www.dmasa.org